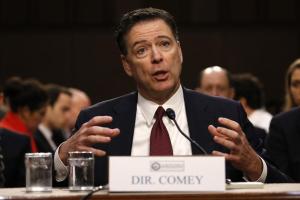 I watched the interview, and perhaps you joined in with the almost 20 million viewers to watch the former FBI Director’s interview late last night. I certainly have formed some opinions about the goings on in our government, but I’m not going to post my opinion, because – counter to how everything seems to work in social media – none of you need to hear my personal opinion. What I do want to accomplish is sharing with you a prayer at this unique and polarized time in our nation.

Dear Heavenly Father. I honestly don’t know what, or who, is believable and true in our nation anymore. There’s no way that I can somehow assess who is telling the truth, the whole truth and nothing but the truth. And I’m pretty sure I’m not being too cynical when I confess that I’m pretty sure every talking head I hear on either side isn’t exactly telling the whole truth. So because I’m not there in Washington, I don’t know any of these people, and I’m not in on conversations to actually have concrete knowledge of what is true – I’m asking you to bring the truth out into the light. The truth isn’t red or blue, Republican, Libertarian, Green, Democrat or Independent. As my Savior, and your Son Jesus once said, ‘You will know the truth, and the truth will set you free.’ Father I’m simply pleading with you that the truth of what’s really happening in the halls of power will be revealed in our anemic nation at a time when we desperately need truth. I’m asking that lies, and those who tell them, will be caught in their lies (and I don’t care which party they are in when they are caught) and become marginalized in their hold of power as a result. May the truth bring about appropriate rule of law, justice, and a reformation of the hearts of those who lead our country from protecting personal and party power to actually serving the public good. Father help us move forward from this coming revelation of truth, where we can get on again with the task of ‘forming a more perfect union.’ Amen