Melt The Bullets And Be On Mission

After watching the horrific shooting of Republican congressmen, lobbyists and support staff on a baseball diamond, it has now come to the point that we as believers must be very clear about how we go about our mission and not be bound to one side or the other of fallen political perspectives. We simply cannot be a part of the divisive problem, in our language and our approach – even if we strongly disagree with views held by the other side of political conversations. Michael Bird, who writes in Christianity Today about the attacks on Christianity in Australia, makes some great observations we all could stand to bear in mind here in America. 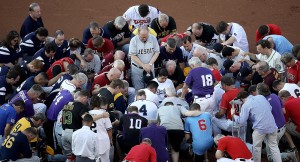 He writes that our new strategy must entail “love of neighbor as the defining theme. We must champion confident pluralism as a socio-political philosophy, demonstrate community-in-action, embrace people of all faiths and none, and live in such a way that those who hate us cannot give a reason for their hatred. The Thessalonian Strategy is not about establishing a new theocracy. Rather, it means advocating for a cultural pluralism where all religions are free and all people respected. We have to show that we are the ones who believe in tolerance, diversity, and respect. We demonstrate the sincerity of this commitment by listening rather than silencing our opponents; explaining rather than demonizing; affirming people’s right to be different rather than demanding uniformity; and turning the other cheek when assaulted by activists.”

Now I know some of my readers, who feel safer on their “side of the aisle,” may feel very uncomfortable with what Michael Bird is saying, but I believe the “Thessalonian Strategy” he references (referring to the Apostle Paul’s approach to reaching Thessalonica) is correct and we must wrestle with it.